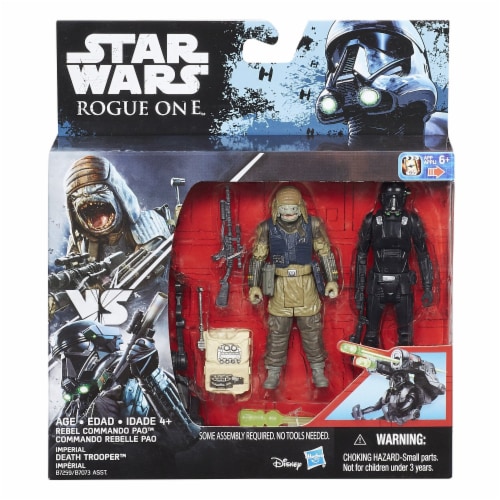 Join the fearless Rogue One Squadron with this Deluxe 2 pack featuring the Imperial Death Trooper figure, Rebel Commando Pao figure, and a dual projectile launcher pack! The elite soldiers of Imperial Intelligence, Death Troopers are encased in specialized stormtrooper armor with a dark, ominous gleam. These soldiers serve as bodyguards and enforcers for Director Krennic, a highly placed officer within the Advanced Weapons Research division of the Empire. A fierce amphibious Drabata, the fierce Commando Pao charges into battle with the Empire while shouting a full-throated battle cry of "Sa Kalla!" as is his custom. He joins the Rogue One team on its historic mission to secure the Death Star plans. Re-create the biggest battles and missions in the Star Wars saga with these Star Wars figures! Experience the journey of the Rogue One Squadron, and the events that led to the climactic demise of the first Death Star. Relive the daring action and excitement from Star Wars Rogue One with this collectable Imperial Death Trooper and Commando Pao 2 Deluxe figure pack. Additional figures each sold separately. Star Wars products are produced by Hasbro under license from Lucasfilm Ltd. Hasbro and all related terms are trademarks of Hasbro.